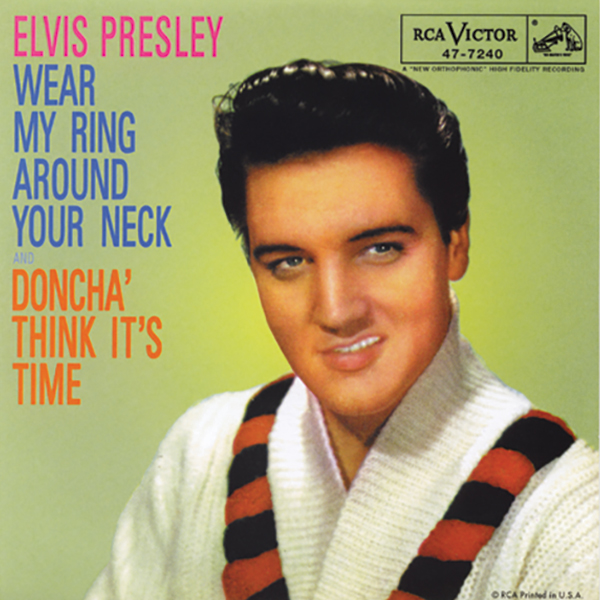 Both sides were cut two months earlier in the midst of filming King Creole, with Elvis’ induction hovering over both artist and record company. The sessions were set up at short notice with the understanding that Jerry Leiber and Mike Stoller would supervise the recording. When it turned out they were not able to do so, mainly due to Leiber’s recent hospitalization for pneumonia, Elvis was at first reluctant to record at all, and when he did the studio atmosphere was strained. The result was a somewhat mixed bag, including twenty-two arduous takes of “Wear My Ring Around Your Neck” and forty-eight of “Doncha’ Think It’s Time.” More than anything else, the difficulties of the session bore witness to Elvis’ frayed musical partnership with guitarist Scotty Moore and bass player Bill Black, the two musicians who had been with him from the start (there had been a very public spat over recognition and money the previous September). Whether Elvis had outgrown their contributions or it was simply a matter of business friction, this was the last session in which Bill Black would participate, and Scotty would be relegated to a subsidiary musical role in future. Sales may have reflected the material’s lack of genuine musical distinction (although it still has lots of charm) – or it may simply have been a matter of market shifts. But the record failed to reach Number One and sold just one million copies.