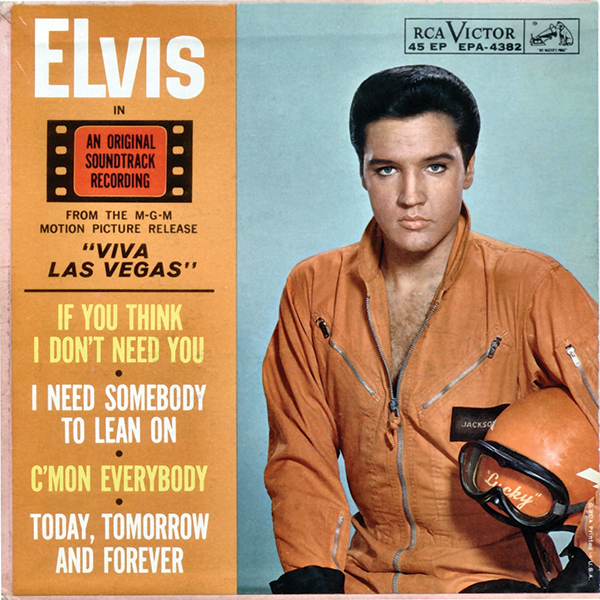 As a corollary to the Colonel’s objection to a soundtrack album that would almost necessarily have had to incorporate three sizzling duets with Ann-Margret, the Viva Las Vegas release was cut down to an EP, which sold just 150,000 copies and barely made the Hot 100. This was a commercial anomaly almost unprecedented in Elvis’ career, because whatever criticism might be made of some of the Colonel’s tactics, his overall strategy of marketing synergy (the movies served the music and vice versa: a prime tenet of MTV-to-come), had always proved commercially sound. In this case the movie was a blockbuster success, showing up at Number Eleven on Variety’s end-of the-year box-office chart, higher than the Beatles’ A Hard Day’s Night. And while its soundtrack may not have achieved the consistency of some of Elvis’ better musical entertainments, it included both the already released single and “I Need Somebody To Lean On,” one of Pomus-Shuman’s most beautiful ballads, a moody dreamscape that stands out in the middle of the film as yet another direction that Elvis’ movie career might have taken. In time both soundtrack and movie would receive due recognition, with the latter becoming the top-grossing film of Elvis’ career.