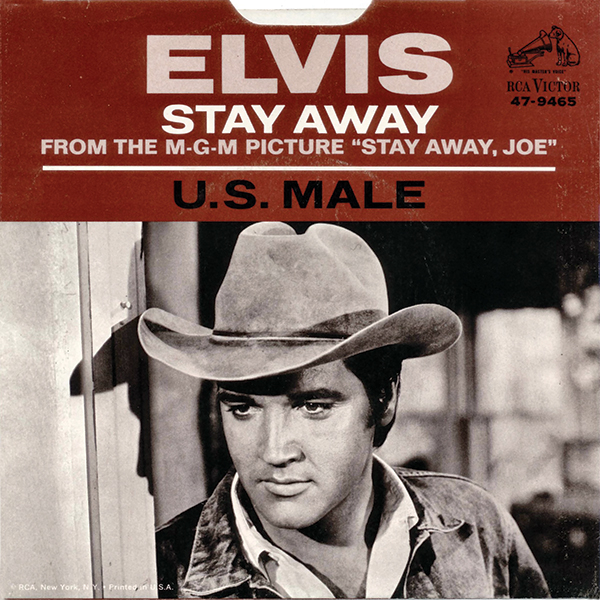 Jerry Reed, evidently mollified, was back in January to turn in a wonderfully inspired performance on a new song of his, “U.S. Male.” After his previous experience he would never have presented Elvis with the song if a&r man Felton Jarvis hadn’t been desperate for material (after two nights of recording all they had was three songs) and practically begged him to submit it. In this case the dearth of material was just as much Elvis’ fault as the publisher’s, as his attention inexplicably, and inconsistently, wandered. At one point, as he struggled through thirty takes of “Goin’ Home” (a song intended for but not used in his next picture, Stay Away, Joe), he even declared, “I don’t know what I can do to improve this except go home.” There was no question about his focus on “U.S. Male,” though, the last song on a long second night. It was, very much like “Guitar Man,” a braggadocious talking blues that obviously captured his fancy in much the same way that Chuck Berry’s “Too Much Monkey Business” had – while “Stay Away,” another track slated for his upcoming movie, had not. Sales of the single were encouraging (close to half a million copies), chart position improved a little, but, more important, a new generation of Elvis fans was listening. As the Boston Phoenix, one of the first in the wave of underground weeklies just beginning to emerge, was moved to note: “In the past six months Elvis has put out three singles which in their vitality rival anything in pop music today…Perhaps Elvis’ [musical] reconversion is an indication that there is more than one standard of success, after all, and that all the bland emulsifiers were only the products of ad men out of touch with our America.”