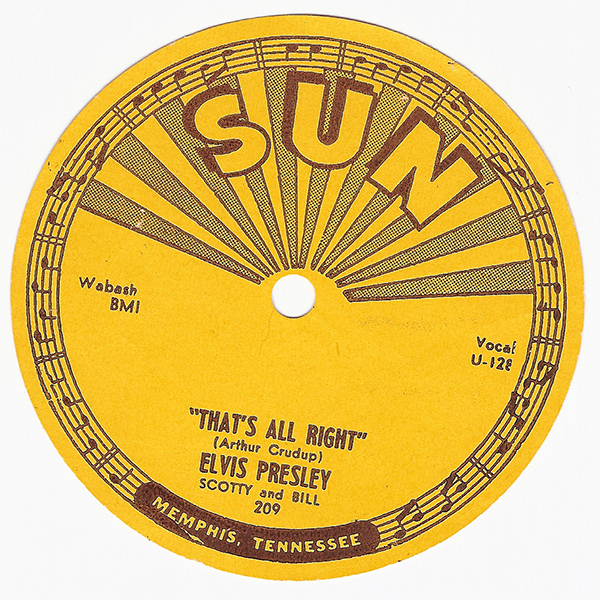 The first side might be seen as something of an accident. An inspired accident, to be sure, but one that was prompted more by desperation than by intent. It was the outgrowth of an audition session at Sun Records set up by Sun owner Sam Phillips nearly a year after Elvis had first come into Phillips’ studio to make a “personal” record at the singer’s own expense. Elvis was backed at the session by guitarist Scotty Moore and bass player Bill Black, who at Phillips’ direction had listened to Elvis run through his repertoire of ballads, country, and pop material at Scotty’s house the day before. Both were in a hillbilly group called the Starlite Wranglers that had recently recorded for Sun, and Phillips judged them to be well suited, both musically and temperamentally, to bring out the best in the insecure nineteen-year-old who seemed unable to settle on a style. It didn’t work quite the way that anyone planned. The audition session was no more focused than the pre-audition, or, for that matter, the informal tryout Phillips had given Elvis just ten days earlier on a song he thought might be good for the boy. Elvis was all over the place on the evening of July 5-6, nervously stopping and starting songs, mostly sentimental ballads, and it was only when he sensed the moment slipping away that he picked up his guitar during a break and started flailing away on a blues that nobody could even have guessed was within his scope. It was at that precise moment that Sam Phillips knew they had arrived at the destination they had unknowingly been seeking all along. “That’s All Right” was in its way a faithful homage to the 1946 Arthur “Big Boy” Crudup blues from which it derived, an homage intended neither to imitate nor to displace the original. And yet it was in its own way utterly, strikingly different. Probably what made it most different was its youthful purity, its unchecked sense of joyous release and exuberant lack of restraint. What set it apart in a more formal way was its combination of rhythm and melody (Crudup’s original, while unquestionably driving, retained the amelodic modal feel of much Mississippi blues), its deliberate blurring of genres, and the use to which its simple instrumentation was put. Scotty’s lead guitar featured some of the lyrical elements of Nashville stylist Chet Atkins in combination with the power-driven blues of some of Phillips’ earlier discoveries while Bill Black’s slap bass added a different, more eccentric form of propulsiveness and Elvis’ acoustic rhythm anchored the whole in an unshakably soaring groove. “To be honest, we just stumbled on it,” Elvis said in response to a question about the derivation of his style from announcer Frank Page in his Louisiana Hayride debut. That was unquestionably true of “That’s All Right,” which Sam Phillips circulated as a single-sided acetate. When it immediately became a radio hit in Memphis, due almost entirely to the enthusiasm of local DJ Dewey Phillips, Elvis, Scotty, and Bill (the trio’s initial name) were faced with the challenge of coming up with a B-side. “We spent three or four nights,” said Scotty, “trying to get something that would be in the same kind of vein. Then Bill jumped up and started clowning and singing ‘Blue Moon Of Kentucky’ in a high falsetto voice, and Elvis started banging on the guitar, and I joined in, and it just gelled.” With the Bill Monroe bluegrass classic, in other words, they set out to recapitulate the formula they had stumbled upon that first night, but in the opposite direction – in this case taking a hillbilly waltz toward a 4/4 blues. The result was an instant city-wide hit, with six thousand orders in something like two weeks, and regional success slowly radiating out from there. Sam Phillips had to fight a great deal of resistance from both country and r&b DJs, with some of the r&b jocks telling him the record was so country it shouldn’t be played after sun-up and the country jocks telling him they would be run out of town if they aired it. Nonetheless, Phillips persisted, Elvis persisted, and the record persisted, eventually posting sales of more than 100,000 copies, almost entirely in the mid-South, Texas, and Louisiana, in the year-and-a-half before Elvis’ contract was sold to RCA.

Read More
Back To Music