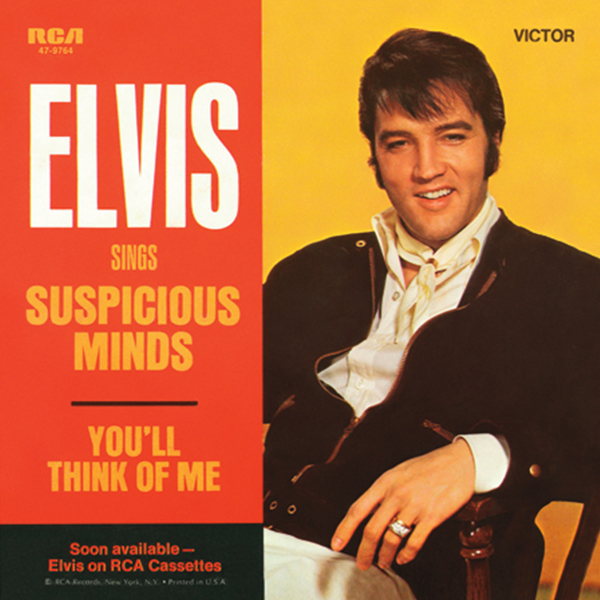 “Suspicious Minds” was one of the highest high points of the Memphis sessions, a song that Chips brought to the table (it was by Mark James, one of his principal writers) and one that would almost immediately become the center of a depressingly familiar business dispute. In a nutshell, Chips refused to give up any of the publishing on the song; Hill and Range’s Freddy Bienstock and the Colonel’s man, Tom Diskin, declared that in that case the song would not be recorded – and it was only Elvis’ interference on the side of artistic, and ultimately commercial, justice (Chips kept the publishing) that led to his cutting a number which, in its adult sensibility and vocal mastery, would in large measure define the last phase of his career. That, however, was not the end of the story. After all the financial arguments were over, after various political and aesthetic disagreements between Chips and RCA a&r man Felton Jarvis had been effectively resolved, Felton recorded a horn overdub in Las Vegas, where Elvis had opened in July in his first regular return to live performing in twelve years. The concept of the overdub was to follow the dramatic architecture of Elvis’ live performance in which singer and band both faded out, then came roaring back to great audience reaction. Now in a Las Vegas studio the song was faded, looped, and brought up again – with the addition of a crudely recorded horn section. To Chips and the American studio musicians this was something like the desecration of a masterpiece (listen to an undubbed version and see if you agree), but to the public – and probably to posterity at large – it added a mysterious, unquantifiable element that led to its becoming Elvis’ first Number One hit in seven years.