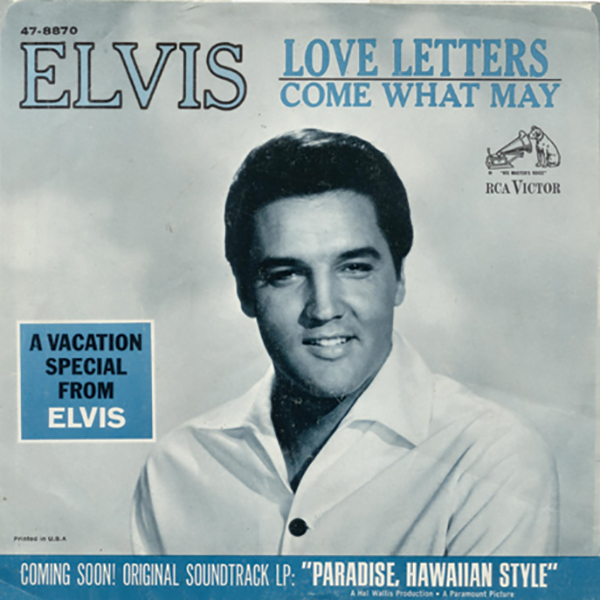 1966 was the year of Elvis’ artistic rebirth. This was the first single to come out of a four-day stint at RCA’s Nashville studio just two weeks earlier whose primary purpose was to record an ambitious new gospel album. These were Elvis’ first non-soundtrack recordings in nearly two-and-one-half years, and with an enthusiastic new a&r man, Felton Jarvis, assigned to replace the more low-key Chet Atkins, there was a whole new tone in the studio. Jarvis was not just a passionate Elvis fan; he was a one-time Elvis imitator, who could barely restrain his excitement. But mostly – almost entirely – it was Elvis whose passion for the music, so long absent from the studio, seemed only to have grown while in exile. It was Elvis who chose the two titles for the single, “Love Letters,” a 1945 hit by Dick Haymes which had been revived in an r&b version by Ketty Lester four years earlier, and a minor Clyde McPhatter hit from 1958, “Come What May.” (McPhatter, along with the Ink Spots’ Bill Kenny, held an unchallenged spot in Elvis’ personal cosmogony.) The pairing may not have represented Elvis’ keenest commercial instincts (it sold a solid but unspectacular 450,000), but it spoke volumes about his reinvestment in his work.