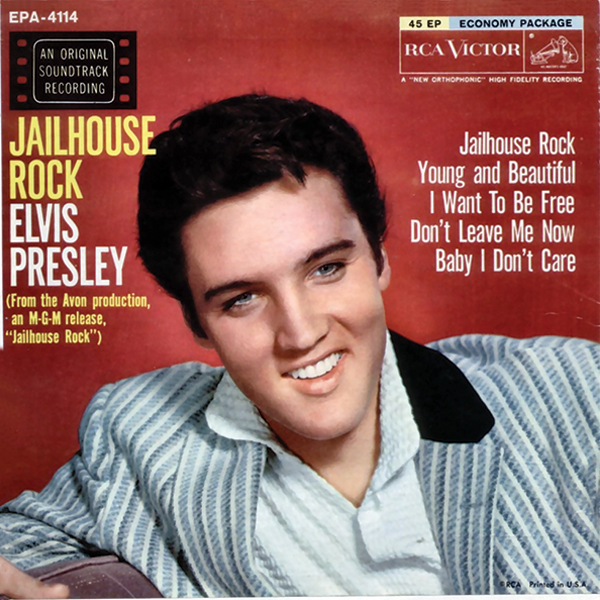 Songwriters Jerry Leiber and Mike Stoller, just a year or two older than Elvis and as accomplished in their field as he was in his, became in effect the producers of the Jailhouse Rock soundtrack. This was a quiet revolution that took place in stages. First they were commissioned to write the soundtrack. By their own colorful account they were locked in a room with a piano and told by Jean and Julian Aberbach, the owners of Elvis’ parent publishing company Hill and Range, that they would not be allowed to leave until they had written enough songs to provide at least a backbone for the score. That turned out to be four songs, three of which were included on this EP – but it was only the beginning of their relationship with Elvis. He was so impressed with their work (not just with the songs they had written for the movie but with their catalog, from which he had already drawn both “Hound Dog” and “Love Me,” not to mention the title track of his second movie) that he invited them to participate in the sessions themselves, with Stoller playing piano on several tracks and the two of them at first consulting on, then actually producing much of the material. Immediately after the sessions they presented Elvis with two new compositions, “I’m A Hog For You” and “Don’t.” Elvis passed on the former (it became a hit for the Coasters) but loved the ballad they had written for him so much that he recorded both it and his reworking of “Treat Me Nice” at his Christmas-album session. Unfortunately, this marked the beginning of the end of their ascendancy, as Colonel Parker, who never looked too kindly on the access of any outsiders, let alone songwriters, into Elvis’ closed world, began a systematic campaign to exclude them. Even with the enormous success of the single, the Jailhouse Rock EP sold over one million copies.