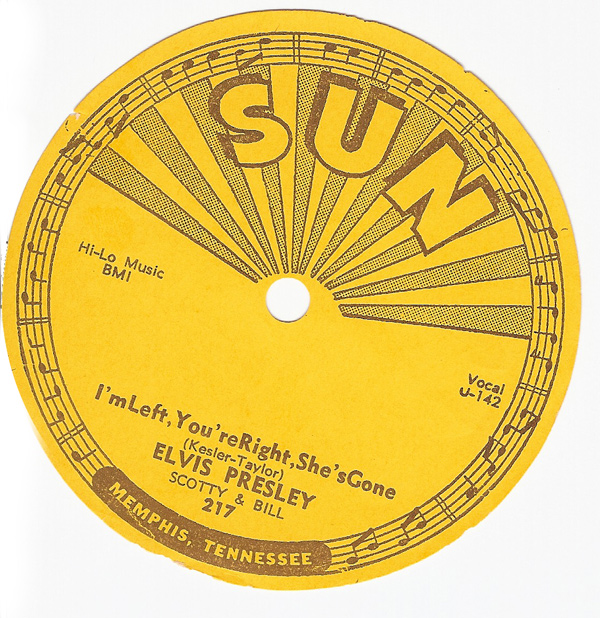 Elvis probably picked up his copy of Arthur Gunter’s recent r&b hit “Baby Let’s Play House” at Poplar Tunes in Memphis, where he undoubtedly also purchased Ray Charles’ groundbreaking “I Got A Woman” and the Eagles’ gospel-based r&b ballad “Trying To Get To You,” a hit in Memphis only because it got so much local airplay from Dewey Phillips. “I Got A Woman” was part of his repertoire almost from the day of its release in December 1954, and Elvis was determined to put his own stamp on each of these numbers, none of which, even the seminal “I Got A Woman,” had enjoyed any degree of crossover success. “I Got A Woman” was quickly scrapped – it simply didn’t match up to the Ray Charles original at this point – and neither Elvis nor Sam Phillips was satisfied with the trio’s rhythmic approach to the Eagles song. The gem of the session, and one of the defining moments of Elvis’ brief stay at Sun, was “Baby Let’s Play House,” so radically different from its plodding inspiration as to be almost unrecognizable. Elvis’ version virtually exploded with energy, high spirits, and the sheer bubbling self-delight that Sam Phillips had first sensed in the young singer’s voice and personality. With its stuttering, hiccoughing vocal, the increasing confidence of Scotty’s powerhouse guitar, above all its irrepressible sense of existential play, the record defined the moment with a triumphant combination of ambition, confidence, and skill. The B-side was recorded soon after with two notable departures from the formula that had been employed to date. First, Sam Phillips solicited an original composition from Stan Kesler, one of the regular musicians he used for his country-oriented sessions. The song was unquestionably country, but with a twist (the pun of its title) and with a susceptibility to a number of different vocal approaches. In the end, after toying with a blues approach, Elvis settled on a fairly straightforward presentation, but what separated it definitively from the country mainstream was the addition of drums for the first time to the trio format. The result was more radio play, at first on the country side – but then many of the DJs turned the record over to play “Baby Let’s Play House,” the song with which Elvis tore up the house every night on his three-week tour through Louisiana, Alabama, Florida, Virginia, and the Carolinas. This was one of the early tours that Elvis’ new agent, the colorful Colonel Tom Parker (who managed the headliner, country music legend Hank Snow), had booked. The Colonel (not a real Colonel, an honorary one – in two states) made sure of radio support for the tour, and “Baby Let’s Play House” eventually entered the national country charts, the first of Elvis’ Sun sides to break out of the pattern of regional success.