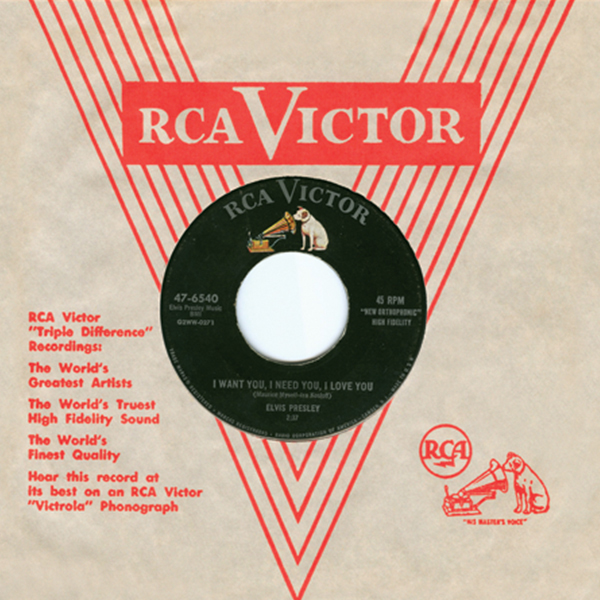 Under the old order of things, Elvis’ uptempo version of Arthur “Big Boy” Crudup’s “My Baby Left Me,” recorded in New York in January, would have been the A-side. The unavoidable comparison is to his first single, “That’s All Right,” another Crudup original, but here the harder, more rocking approach shows an evolution that has taken place in just a few months, with respect to both Elvis’ musical thinking and his utilization of a band that now included drummer D.J. Fontana, a regular since the previous fall. It may well be, though, that the choice of the pulsating ballad “I Want You, I Need You, I Love You” as the A-side indicates an even more dramatic evolution and expansion of both artistic and commercial goals. The recording of “I Want You, I Need You, I Love You” in Nashville just two weeks earlier had proved somewhat traumatic. Sandwiched in between one-nighters, the 9:00 a.m. session required Elvis to rent a plane and fly in from Texas after a gig. It may have been the earliness of the session, but the mishaps that they encountered on the flight, both small (getting lost) and large (running out of fuel) didn’t help any. In the end they addressed just one song in three hours, failing to come up with a satisfactory master even after seventeen takes (the master was spliced). The backup trio was not the Jordanaires quartet that Elvis had requested (only Jordanaires leader Gordon Stoker was present), the Colonel was unwilling to see Elvis invest any more of his time in building up a backlog of material for a record company that was sure to use it as leverage in any negotiations with his client, and Steve Sholes, who had flown to Nashville both to supervise the session and to present Elvis with a gold record for “Heartbreak Hotel,” was left feeling angry and frustrated. These were emotions which he communicated in full in a letter to the Colonel that became a template for a relationship in which Sholes was cast as the importunate seeker, the Colonel as his client’s relentless defender against all pressure and criticism. The success of the single to some degree mirrored its provenance. It failed to reach Number One, but it still sold 1.3 million copies and stamped Elvis with the legitimacy he had been seeking from the first as a serious ballad singer.