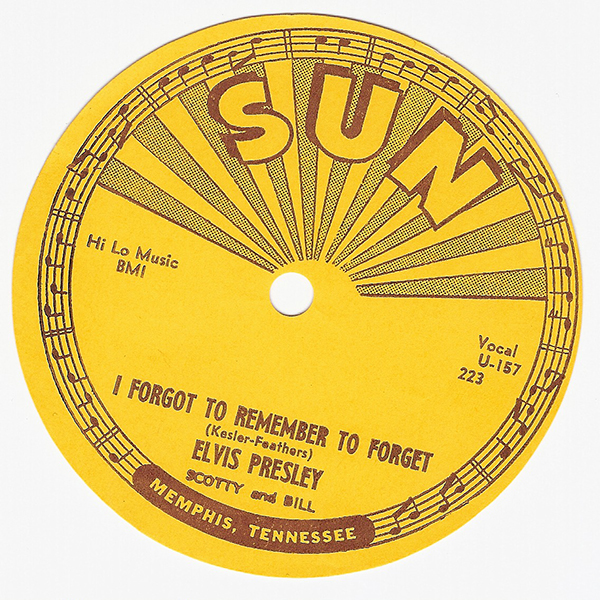 With the success of the previous single, Sam Phillips was determined to pursue the same course on the next. Once again they cut “Trying To Get To You,” only this time with the addition of drums, in a beefed-up soulful version. This would almost certainly have been a prime candidate for the A-side of the next single had it not been for the two other songs that were recorded that day. “Mystery Train” was a number that Sam Phillips had previously cut on Sun by the great blues singer, Little Junior Parker. Elvis jumped on the song right away – it was, he told Phillips, his favorite Junior Parker cut, and there was no question that Elvis’ voice was perfectly suited to its light winsome sound. But for the guitar part, Phillips turned the Little Junior Parker record over and played the blistering rhythm track by a teenaged Floyd Murphy for Scotty Moore. The result was a unique hybrid, combining the delicacy and durability of both its sources, with Elvis capturing a kind of carefree, free-floating quality that made it seem as if it were being made up on the spot. Even the end of the record, which trails off in a bubbling laugh, gives the impression of utter, spontaneous abandon. It was a classic – perhaps the classic from all the Sun sessions – but it was not a hit. The hit was the other side. “I Forgot To Remember To Forget” was, once again, a clever Stan Kesler composition, once again redeemed from mere cleverness or cloying sentimentality by Elvis’ approach to rhythm. “He just didn’t dig the song at first,” said Sam Phillips. “Maybe it was a little too country, but I thought we needed to show a little more diversification. I told the drummer, ‘Keep it 4/4 until we go into the chorus, then you go with the bass beat at 2/4’ – and by doing that it sounds like it’s twice as fast as it is. Elvis really loved it then.” The public really loved it, too. Elvis was voted “Most Promising C&W Artist” by Billboard magazine, and the song was just beginning to take off nationally when Phillips sold his contract to RCA for $40,000 on November 21, 1955. The record went to Number One on the country and western charts in its RCA re-release in early 1956.