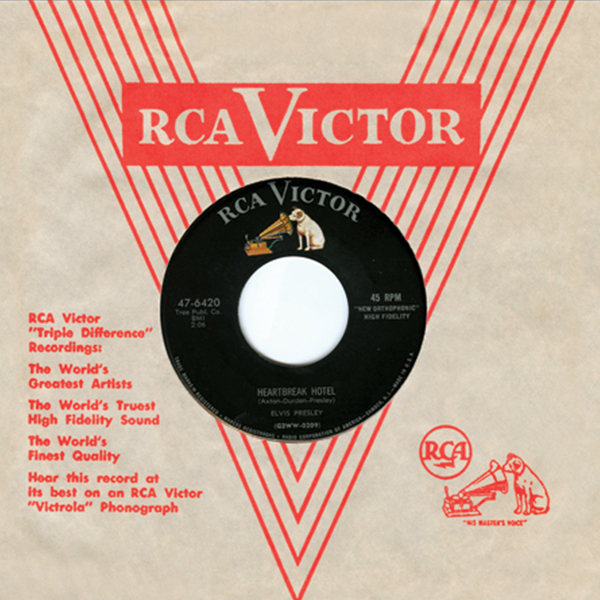 1956 was truly the annus mirabilis for Elvis Presley and popular music. But it didn’t start out that way. His first RCA single was so slow in building that label vice president and specialty singles head Steve Sholes (who had instigated the purchase of Elvis’ contract from Sun) put in a panicked call to Sam Phillips, who was currently having massive, across-the-board success with Carl Perkins’ “Blue Suede Shoes.” Had he possibly bought the wrong artist, asked Sholes, explaining that he had gotten nothing but withering criticism from his superiors when he returned to New York with the tapes of Elvis’ first Nashville session in January. “They told me it didn’t sound like anything; I’d better go back and record it again.” The backbiting didn’t stop there, as the unquestionably downbeat “Heartbreak Hotel” (a deliberate stop-time blues inspired by a suicide note) was slow to even appear on the charts. But then it did, finally breaking in on March 3 after Elvis had made four appearances on Jimmy and Tommy Dorsey’s nationally televised Stage Show, a strategy in which Colonel Tom Parker, now Elvis’ exclusive manager, prevailed over the indifference and active opposition of both the record company and Elvis’ booking agency, William Morris. The single reached Number One three months after its release. Fittingly enough, Elvis himself had chosen the song, when its nominal co-writer, Jacksonville, Florida schoolteacher Mae Axton, who worked for the Colonel as a local publicist, had presented it to him at the country music DJ convention in November. Elvis liked it so much that he simply exclaimed, “Hot dog, Mae, play it again!” and pledged right then and there to cut it at his first RCA session. Mae pledged, equally spontaneously, to give him a third of the writer’s copyright. Both persisted in their commitment, and the result, while not to everyone’s taste (despite his reassurances to Steve Sholes, Sam Phillips saw it as “a morbid mess”) certainly bore out their good faith. Sholes, who had expected to “produce” the session in the conventional sense, quickly discovered that his barely twenty-one-year-old signee had no intention of surrendering the reins to him or anyone else. One additional result of Elvis’ insistence upon being purely himself was his recording of the B-side, a Don Robertson ballad in the Ink Spots tradition which Elvis would frequently cite over the next six months as his favorite among his own recordings.