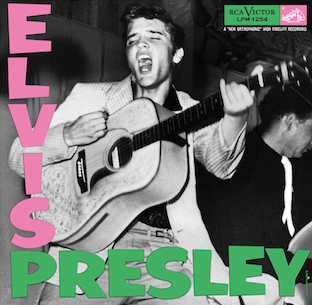 Elvis’ first album was rapidly assembled to capitalize on the gathering success of the single (which was excluded from the LP by managerial fiat). The album included three tracks from the Nashville session, four more from a follow-up series in New York, and five previously unreleased Sun sides, including everything from decorative ballads like “I Love You Because,” “Blue Moon,” and “I’ll Never Let You Go” (which Sam Phillips had thought would never have a chance in the crowded pop marketplace) to “Trying To Get To You,” which might well have been the A-side of Elvis’ next Sun single, had he remained with the company. It is on balance a phenomenally diverse group of songs, and while it was almost entirely ignored by the cultural mainstream (it would be hard to find a single review that recognized its musicality, eclecticism or ambition – it might in fact be hard to find a single serious review), it went straight to Number One on the charts, eventually selling more than 300,000 copies and becoming RCA’s all-time best-selling album up to that time. Even the cover was an almost immediate iconic classic, showcasing a tonsils-out publicity photo that Colonel Parker had commissioned in Tampa in July 1955.