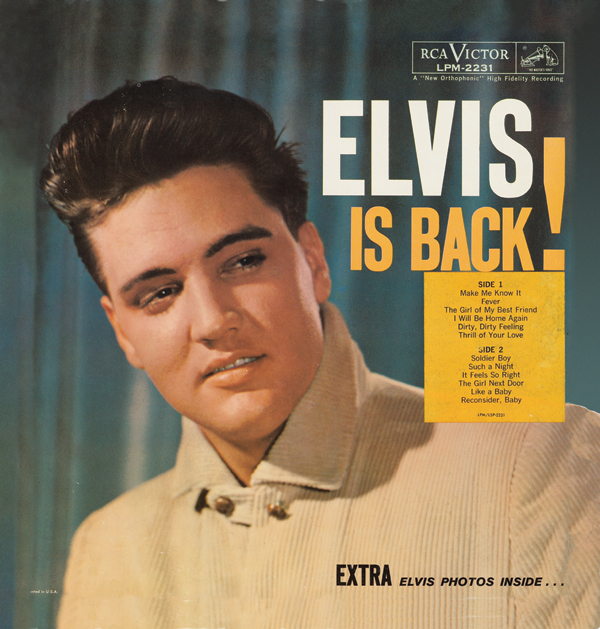 There was a gap of two weeks between the first post-army session and the second, with Elvis’ appearance on Frank Sinatra’s “Welcome Home, Elvis” television special (Sinatra, remember, was the pop icon who had dismissed rock ‘n’ roll, and by extension everything that Elvis stood for, as “music for cretinous goons”) coming in between. The television appearance was an unmitigated triumph, and the second all-night session added twelve more titles to the six already recorded. The album that came out of these sessions was as varied and ambitious as anything Elvis had ever done, presenting blues, r&b, country, pop, and gospel sounds in a mix that could stand as Elvis’ tribute to the American vernacular tradition. This was something he had been planning the whole time he was in Germany. In preparation for the sessions, he had applied himself to the task of expanding both his voice and repertoire. With the help of fellow G.I. Charlie Hodge, an experienced singer and professional entertainer whom he had met on the voyage to Bremerhaven, Elvis studied breath control and did vocal exercises to increase his range. With Hodge and Memphis friend Red West, he recorded a wide variety of material on a little Grundig tape recorder, setting his sights especially on an English-language version of the Caruso classic, “O Sole Mio,” which he knew not just from the original but from the 1949 Tony Martin adaptation “There’s No Tomorrow.” From delicate homages to Clyde McPhatter (“Such A Night”) and Little Willie John (“Fever” – with more than a slight nod to Peggy Lee), to beautifully modulated expressions of raw emotion (“Reconsider Baby,” “Like A Baby”), Elvis Is Back suggested a rare breadth and depth of feeling for a pop LP in a market that had often seen the long-playing record as a kind of grab bag of throwaways. It sold 300,000 copies, comparable to previous album sales, but with no additional EP releases (explanation unknown) there was not the usual quota of ancillary sales.