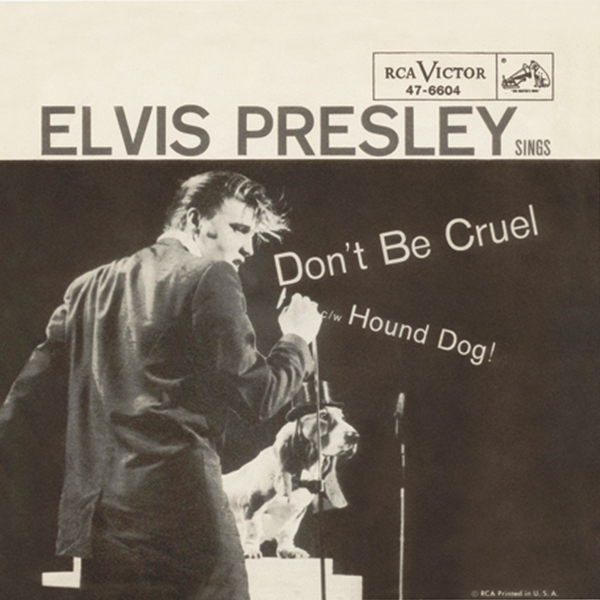 After the expensive failure of the recent Nashville session, Steve Sholes made the decision to record Elvis’ next single at RCA’s home studio in New York, especially since Elvis was going to be in the city anyway for a television appearance on The Steve Allen Show on July 1. (Allen had gone out on a limb for this controversial new act when his Sunday-night rival, long-time ratings king Ed Sullivan, sniffing at the unseemliness of it all, refused even to enter the bidding. Allen trounced Sullivan in the ratings for the first and only time, and Sullivan immediately overcame his moral distaste and signed the boy up for three appearances at more than twice the original rate.) They went into the studio the day after the show in hopes of recording as many songs as they could get, but with Elvis specifically committed only to recording “Hound Dog,” a number that had become a staple of his stage act over the last two months. He had known the song originally from Big Mama Thornton’s tough 1953 blues, but he had picked up the idea of adding it to his show from Freddie Bell and the Bellboys, whose performance he had caught during his recent booking in Las Vegas. He introduced the song into his act two weeks later, upon his return to one-nighters in mid-May, and it immediately became a showstopper in the bump-and-grind version he displayed on The Milton Berle Show on June 5, setting off a national wave of criticism in which he was denounced as “not only suggestive but obscene.” The performance was toned down for The Steve Allen Show (he sang the song to a female basset hound while dressed in white tie and tails), and up until the time he went into the studio he was uncertain how exactly to record it not so much because of the controversy as because he saw it as a kind of novelty number that might not easily translate into a strong recorded performance. After thirty-one takes, it did, and then he listened to a selection of acetate demos provided by Freddy Bienstock, the new song representative assigned to Elvis by his publishers, Hill and Range. He chose “Don’t Be Cruel” by an obscure Brooklyn-born r&b singer and songwriter, Otis Blackwell. As per Hill and Range’s contractual requirement, it came with the assignment of half the publishing to Elvis Presley Music and half the writer’s share to Elvis Presley, but as Blackwell, the first of Elvis’ great “contract” writers, was always quick to point out, it was the best deal he ever made. In addition, it provided the blueprint (followed not only by Blackwell but by many other writers, some extraordinarily gifted, some merely gifted at imitation) for a new Elvis style that combined his well-documented gift for rhythmic insistence with a natural nod toward elegant ease. The record was an unstoppable double-sided smash, with “Hound Dog” quickly reaching Number Two on the charts, only to be eclipsed by “Don’t Be Cruel,” which went to Number One. It sold four million copies, the biggest single record of Elvis’ career, but there was no question which side was his personal preference.