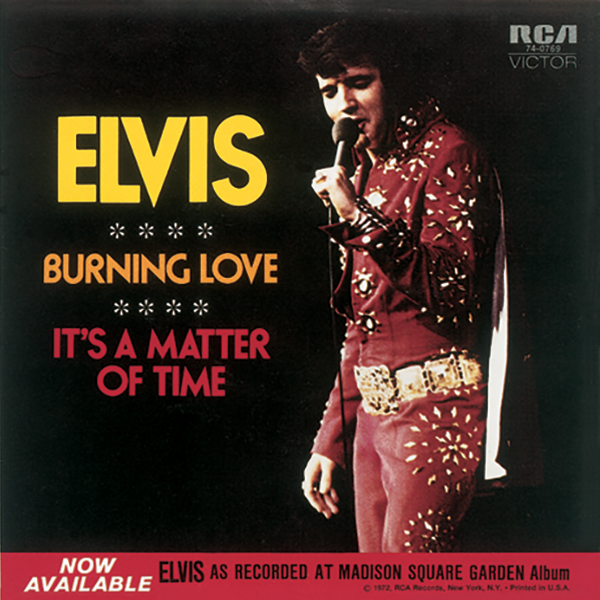 Just when it seemed Elvis might never record another uptempo hit, or at least sanction its release as a single, “Burning Love” came along. It did not come easy. Everyone at the March 1972 Hollywood session told Elvis that the Dennis Linde song would be a smash. As Elvis’ personal a&r employee, Felton Jarvis negotiated a publishing deal with his friend Bob Beckham, who also published one of Elvis’ favorite new writers, Kris Kristofferson. But Elvis himself, in a disconsolate mood over the break-up of his marriage, didn’t feel like recording it. He focused instead on songs of heartbreak like Red West’s “Separate Ways,” Kristofferson’s “For The Good Times,” and Mark James and Wayne Carson’s “Always On My Mind.” It was only after a great deal of encouragement from his friends mixed in with the enthusiasm of his own band, who for the first time were joining him in the studio, that he eventually gave the song at least an energetic if not a convincingly passionate performance. But it gave the lie to what he had told reporters at his Madison Square Garden press conference in June, when “Burning Love” was already in the can: that hard rock songs were “very difficult to find.” And its success proved unquestionably that the market was still hungry for just that sort of song from Elvis. It was his biggest hit since “Don’t Cry Daddy,” and in addition to selling over a million copies, was his highest-charting single since “Suspicious Minds.” But despite its popularity it never became a personal favorite of his in live performance.