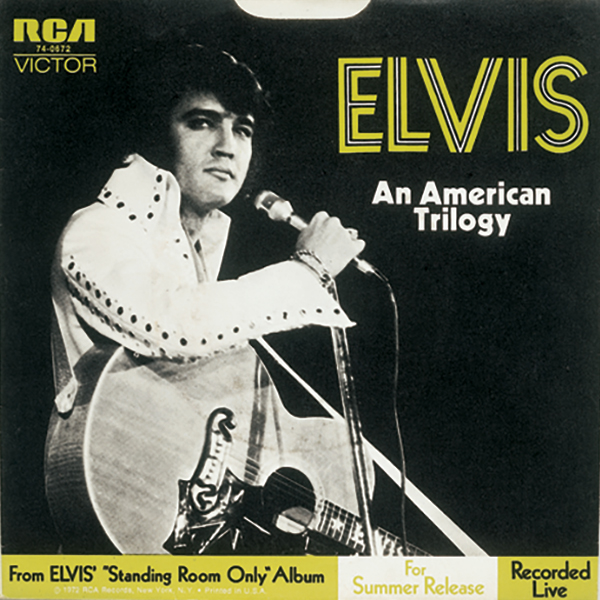 In February of 1972, RCA recorded Elvis live in Las Vegas for the first time since August 1970. There was about half an album’s worth of new material, and it was Elvis’ intention to put out a single of his live version of “The Impossible Dream” from Man From La Mancha. For all of his investment in both the song and its message, though, and for all of its success in a characteristic big-ballad treatment, he set it aside in favor of Mickey Newbury’s “An American Trilogy,” with which he had become totally enamored in its author’s recent Top 40 version. A loose medley of the Confederate anthem “Dixie,” the slavery folk song “All My Trials,” and the stirring Union rallying cry “Battle Hymn Of The Republic,” the song spoke to Elvis not just about inescapable historical divisions but about the resolution to which he hoped those divisions might some day come. With a swelling arrangement by TCB keyboard player Glen D. Hardin, Elvis delivered a passionate performance, and while his commercial instincts for a hit single were no more borne out by this number than by his last half-dozen choices, it became a staple of his live act (and one of his most requested numbers) over the years.