Skip to content
Back To News Index
Lisa Marie Presley Duets With Elvis Presley In New Video ‘I Love You Because,’ Premiering Oct. 18 On CMT 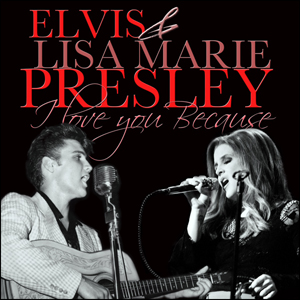 LISA MARIE PRESLEY DUETS WITH FATHER IN NEW VIDEO "I LOVE YOU BECAUSE," PREMIERING THURSDAY, OCTOBER 18th ON CMT AND CMT.COM

Lisa Marie Presley will world premiere her new video "I Love You Because," an emotional duet with her late father Elvis Presley, on CMT and CMT.com on Thursday, October 18th during the 8 and 10 a.m. ET/PT music hours. At the suggestion of renowned producer T-Bone Burnett, Lisa recorded the Elvis song in August for the 35th anniversary of her father's death. The video was only intended to be viewed by some 25,000 fans in attendance at the 35th Anniversary Concert at the FedEX Forum in Memphis, but following a warm reception by fans, Presley agreed to share the video with CMT.

The single "I Love You Because" from Sony Legacy will be available for purchase digitally beginning October 16th, and the full video will be available on iTunes on October 25th . Additionally, Lisa Marie announced she will hit the road for two weeks in November in support of her new album Storm & Grace, starting November 1st in Tunica, Miss., and ending November 17th at Carnegie Hall in New York, NY.

"I Love You Because" was first recorded by Elvis on July 4th and 5th, 1954 at SUN Studio. The session started on the 4th and ended early on the morning of the 5th in Memphis, Tenn., the same day he recorded "That's All Right." Producer Sam Phillips did not think "I Love You Because" was the right song for Elvis' first single, so it eventually found its way to his first album released in 1956. Following its first studio recording, the song was never performed again by Elvis. Lisa Marie recorded her vocals to the song on August 8, 2012 at The Village in Santa Monica, Calif., after consulting with producer T-Bone Burnett who presented her with the idea of "I Love You Because" as a special song for her fans.

The video for the track was a personal project for Lisa Marie, in which she introduces her four children as the continuation of her father's legacy. She recorded the vocals to the song on August 8th , 2012, and made the video over the course of just four days in time to debut it August 16th , 2012 at the 35th Anniversary Elvis Concert at the FEDEX FORUM in Memphis. Lisa Marie Presley's four-year-old twin girls Finley and Harper, as well as her son Benjamin (19) and daughter Riley (23), are featured in never-before-seen family photos, along with Lisa Marie and Elvis.

The full list of her upcoming tour dates follows:

CMT, a unit of Viacom Inc. (NASDAQ: VIA, VIAB), is the leading television and digital authority on country music and entertainment, reaching more than 92 million homes in the U.S. CMT and its website, CMT.com, offer an unparalleled mix of music, news, live concerts and series and is the top resource for country music on demand. The network's digital platforms include the 24-hour music channel, CMT Pure Country, CMT Mobile and CMT VOD.