Skip to content
Back To News Index
‘Elvis On Tour,’ A New UK Exhibition Presented by Graceland 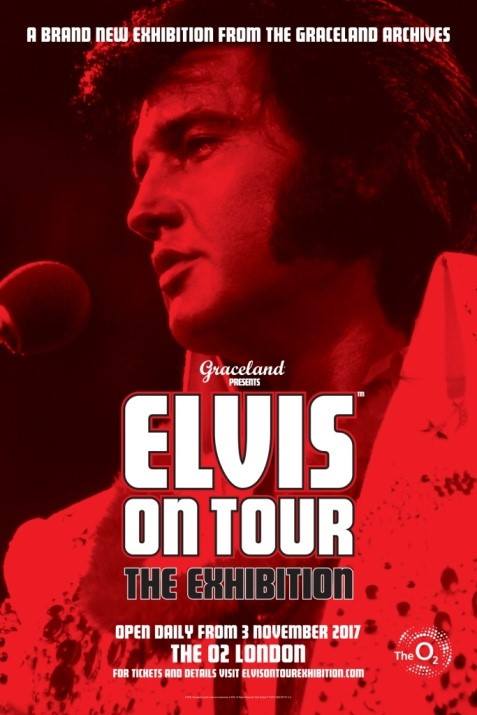 Due to phenomenal public demand, Elvis Presley, the King of Rock ‘n’ Roll, will be returning to The O2 in London with a new exhibition, Elvis on Tour, opening on November 3, 2017. Tickets for this new three month retrospective will go on sale at 9:00 a.m. on Friday, August 18.

Elvis fans can take part in a pre-sale starting at 9:00 a.m. on Thursday, August 17. Click here to learn more.

Following the mammoth success of 2014/2015 Elvis at The O2 exhibition, which was visited by over 200,000 people, Elvis on Tour The Exhibition will showcase more than 200 artifacts from the Graceland archives many of which will be in the UK for the very first time.

This new exhibition covering the years 1969 – 1977 will provide an in-depth look at the world that was Elvis on Tour, offering a unique insight into exactly what drove the audiences wild in the ’70’s – the chance to see the King in concert as he toured America.

Bringing together dozens of examples of Elvis’ costumes and stage wear along with the guitars, jewellery, posters and - for the first time - unique interviews with Elvis’ touring band, Elvis on Tour The Exhibition will take fans into a world where millions of people watched the greatest live rock and roll shows ever staged, which at one point was televised to over one billion people worldwide.

Providing an insight into what went on backstage, the planes, the clothes and of course the music, Elvis on Tour The Exhibition will bring fans as close as possible to the experience of seeing the King live for themselves.

Artifacts showcased in Elvis on Tour The Exhibition and leaving Graceland include:

"To have a second exhibition dedicated to Elvis opening in London is remarkable. We were overwhelmed by the huge numbers, who were not only fans but people who were curious to learn more about Elvis, who visited the last exhibition at The O2," Priscilla Presley said. "Elvis was beloved by his fans and they also meant the world to him. We are delighted that this carefully curated selection of over 200 artifacts from the Graceland archives will give them the opportunity to gain an even greater insight into his life and how he impacted popular culture around the world through his music, movies and personal style. Lisa and I are excited to share these treasured memories that cover 1969 - 1977 for this unique exhibition in London.”

Priscilla Presley will be making a very special appearance in London on November 30, 2017, joining the Royal Philharmonic Concert Orchestra on stage at The O2 as part of the Elvis in Concert – Live on Stage UK tour.

“It is so exciting to curate a second Elvis exhibition at London's O2 Arena. This exhibition will focus on Elvis' touring years and showcasing items that have never been displayed outside of Graceland before," said Angie Marchese, director of archives at Graceland.