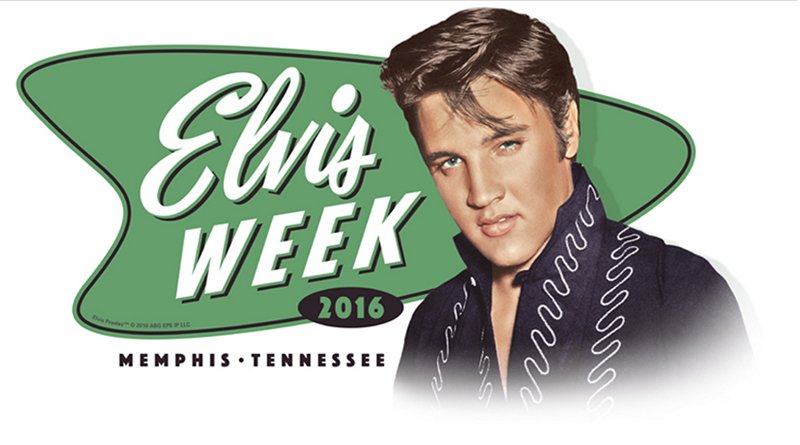 MEMPHIS, Tenn.--Elvis Week 2016 at Elvis Presley’s Graceland® will feature more than 25 events including live music, the Ultimate Elvis Tribute Artist Contest®, the Auction at Graceland and panel discussions with the musicians, co-stars and friends of Elvis that knew him best. On August 10-16, Elvis™ fans and music lovers will join guests such as legendary musicians DJ Fontana and Glen Hardin, vocalists Estelle Brown and Ray Walker, former Elvis girlfriend Marilyn Rhiel, and movie co-stars Celeste Yarnall, Francine York and Christopher Riordan, to help celebrate the life and legacy of Elvis and the 60th anniversary of his breakout year of 1956.

Tickets for individual Elvis Week events are on sale now at ElvisWeek.com. The cornerstone event, the Candlelight Vigil, will begin on Monday, August 15, at 8:30 p.m. CDT at Graceland’s front gate. Elvis music sets the tone of the evening as fans walk up the driveway to the Meditation Garden. This free event lasts throughout the night as thousands of participants gather on Elvis Presley Boulevard listening to music, remembering Elvis and enjoying the memorials that are created by fans along the street.

The highly-anticipated Auction at Graceland on Saturday, August 13, will be the most extensive and comprehensive auction at Graceland yet, featuring rare Elvis artifacts authenticated by Graceland Authenticated. Highlights in this 3rd Annual Elvis Week auction include the January 8, 1935 Elvis Presley Birth Record document from the delivering physician, Dr. Robert Hunt, estimated to sell between $80,000 - $100,000; the 1973-74 Elvis Presley-signed American Express Card known to be the finest Elvis credit card in existence, estimated at $40,000 - $60,000; and a pair of pants Elvis wore in his second film, “Loving You,” in 1957, estimated at $15,000 - $20,000. The auction is open to registered bidders, and all the items included are from third-party collectors, not from the treasured Graceland Archives. More details on purchasing the catalog and auction registration are available at GracelandAuctions.com. Online bidding begins on Monday, July 25. To partner with Graceland Auctions and have your artifacts considered for future auctions, email [email protected] or call Consignment Director Jeff Marren at 773-612-0918.

The Official Graceland Insiders Conference on Sunday, August 14, will feature DJ Fontana, Elvis’ drummer for 14 years, who started performing with him in 1954; Marilyn Riehl (Evans), Elvis’ girlfriend who was there for the famous Million Dollar Quartet session at Sun Studio; Barbara Sims, who worked at Sun Studio as a publicist from 1957-1960; Estelle Brown, member of The Sweet Inspirations who recorded and performed with Elvis; and Ray Walker, member of The Jordanaires, who also recorded and performed with Elvis. There will also be a Sony Music panel talking in-depth on the new RCA/Legacy Recordings release “Way Down In The Jungle Room.” The Insiders Conference also features special segments that highlight various parts of Elvis’ life and career with sneak peeks, behind-the-scenes looks, and rarely-seen videos.

Designing for the King on Thursday, August 11, explores what it was like to design, dress and decorate for Elvis Presley, with Hal Lansky, son of Bernard Lansky and owner of Lansky Bros., a clothing store that helped dress the king as early as 1952; Lowell Hays, the jeweler who made 200+ pieces of jewelry for Elvis; and acclaimed interior designer Bill Eubanks, who designed several rooms at Graceland.

Elvis 101 on Friday, August 12, will explore Elvis’ influence on music and pop culture. Hear from acclaimed author Peter Guralnick, talking about his most recent release, “Sam Phillips: The Man Who Invented Rock ’n’ Roll”; Dr. Charles Hughes, Director of the Memphis Center at Rhodes College and professor for the course there entitled Elvis Presley and America; and John Jackson, Ernst Jorgensen and Roger Semon, all of Sony Music, talking about Elvis’ breakout year of 1956.

Also on August 12, the Elvis Presley Fan Club Presidents’ Event will feature special guests Charles Stone and Greg McDonald, both of whom worked closely with Colonel Tom Parker on Elvis’ tours and career.

A special Sunday evening event on August 14, The Gospel Music of Elvis Presley, will celebrate the music that not only influenced Elvis but earned him is three GRAMMY® Awards. Special guests include some who shared the stage with Elvis, plus those who have been inspired by his music: Bill Baize, Donnie Sumner, Larry Strickland and Ed Hill, former members of JD Sumner and the Stamps Quartet; Terry Blackwood, Darrell Toney and Lynn Royce Taylor of Terry Blackwood and The Imperials; plus musicians Andy Childs and Terry Mike Jeffrey.

On Monday, August 15, fans can attend Conversations on Elvis featuring Elvis’ movie co-stars Francine York (“Tickle Me”), Celeste Yarnall (“Live a Little, Love a Little”) and Christopher Riordan (eight Elvis movies, including “Viva Las Vegas” plus the 1968 Comeback TV Special ). Then, later that afternoon, hear stories from Glen Hardin, who played piano for Elvis on-stage and in the studio, at An Afternoon with Elvis’ Piano Man, Glen Hardin.

Other Elvis Week events include the 34th annual Elvis Presley Livitup 5K run, the Sound and Soul of Memphis Music concert, and much more.

As thousands of fans gather for Elvis Week, the much-anticipated, new, world-class resort hotel, The Guest House at Graceland, will be nearing completion just steps away from Graceland Mansion, with only 11 weeks of construction remaining prior to its October 27-30 Grand Opening Weekend. Graceland’s Founders membership program, which provides its members with VIP privileges and special benefits at the new resort, will offer a VIP hard hat tour of The Guest House construction site — exclusively for Founders — during Elvis Week. Founders membership details are available at Graceland.com/TheFounders.

The Elvis Week 2016 app will soon be available for download for free from Google Play for Android phones or iTunes for iPhones. The app is the perfect mobile guide to everything Elvis Week and includes the official schedule, details on guests, partner offers, FAQs, a map of the Graceland grounds, a virtual candle for the Candlelight Vigil and more. Visit Graceland.com for more information about the Elvis Week 2016 app and for a complete schedule of Elvis Week events, including ticket prices, guest bios and venues, visit ElvisWeek.com.

Elvis Presley’s Graceland, in Memphis, is music’s most important and beloved landmark, with hundreds of thousands of fans from around the world visiting the historic home each year. Elvis Presley Enterprises, Inc. (EPE) manages the operations of Graceland, its related properties, including The Guest House at Graceland 450-room hotel, opening in October 2016, as well as the Graceland Archives, featuring thousands of artifacts from Elvis’ home and career. EPE also produces and licenses Elvis-themed live events, tours and attractions worldwide. Graceland Holdings LLC, led by managing partner Joel Weinshanker, is the majority owner of EPE. Auction A Circle and Graceland Auctions TNGL#5967 is the entity that manages Auctions at Graceland. In 2015, Graceland was named the world’s “Best Musical Attraction” and “Best Historic Southern Attraction” in the USA Today 10Best Readers’ Choice Awards and in 2013, voted the #1 “Iconic American Attraction” in the same poll. For more information on EPE and Graceland, visit www.graceland.com.