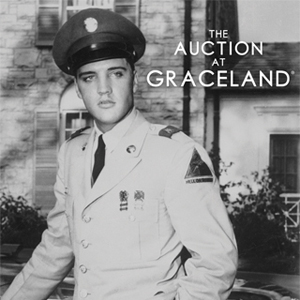 Third Graceland-Authenticated Auction to be Largest Yet

MEMPHIS, Tenn.--Graceland Auctions has announced that its third auction of rare and authentic Elvis Presley™ artifacts and memorabilia will be held during Elvis Week 2015, featuring an impressive 174 lots, making it the largest and most comprehensive auction yet held on the grounds of Graceland®. The Auction at Graceland will take place in the Graceland Archives Studio on Thursday, August 13, 2015, at 8:00 p.m. EDT/7:00 p.m. CDT.

Fans, music collectors and pop culture enthusiasts from around the world are expected to participate on site and online in this unprecedented auction, with all 174 lots expertly authenticated by the staff of Graceland Authenticated. All of the items in the auction will be offered from third-party collectors and none of the items included in the auction will come from the treasured Graceland Archives. The mansion and all artifacts in the Graceland Archives continue to be owned by Lisa Marie Presley and are not for sale. Graceland Authenticated sets a new standard for pop culture authentication and appraisal to ensure artifact accuracy and provide evaluations of privately-owned collections.

Previous Graceland Auctions have generated far greater bids than projected. In early 2015, the acetate featuring the first-known recording of Elvis Presley singing “My Happiness” recorded at Memphis Recording Service (home of Sun Records) sold for $300,000. Elvis’ 1977 Cadillac Seville sold for $81,250 along with a bullet-riddled shooting target from the Graceland smokehouse, which sold for $27,500 in August of last year.

Among the 174 items to be included in the August 13 auction, notable items include:

Presley’s blue jumpsuit worn at the Las Vegas Hilton is now on display at Graceland’s new Las Vegas exhibition -- “Elvis: The Exhibition” at the Westgate Las Vegas Resort & Casino. The Westgate is the same venue that was originally known as the International Hotel and then the Las Vegas Hilton when Elvis performed in its historic showroom. Other auction items on display at the Westgate Las Vegas exhibition through July 20 include the “TCB” gold and diamond necklace gifted to Sammy Davis Jr., a 1956 Las Vegas "New Frontier" menu signed by Elvis Presley, and a 1968 Elvis Presley film-worn jacket from “Live a Little, Love a Little.” Most of the auction lots can be viewed at the Elvis Presley Automobile Museum at Graceland in Memphis starting July 21 through August 13 from 9:00 a.m. to 5:00 p.m. CDT.

The Auction at Graceland collectible catalog is now available to order at ShopGraceland.com and features more than 150 pages, including photos and details of all the auction items. This exclusive catalog offers an up-close look at these special pieces of Elvis history and is a wonderful collector’s item. More details on purchasing the catalog and auction registration are available at www.gracelandauctions.com.

Admittance to the live auction event is by ticket only. Tickets will be available for purchase at Graceland on August 13 at the Graceland ticket pavilion between the hours of 9:30 a.m. and 5:30 p.m. CDT. Please secure your tickets early as a limited number are available. Registered bidders can reserve a paddle for in-person bidding by emailing [email protected]

For more information about how to submit items for authentication by Graceland Authenticated, please visit www.gracelandauthenticated.com. To have an artifact considered for inclusion in future Graceland Auctions, please email [email protected]