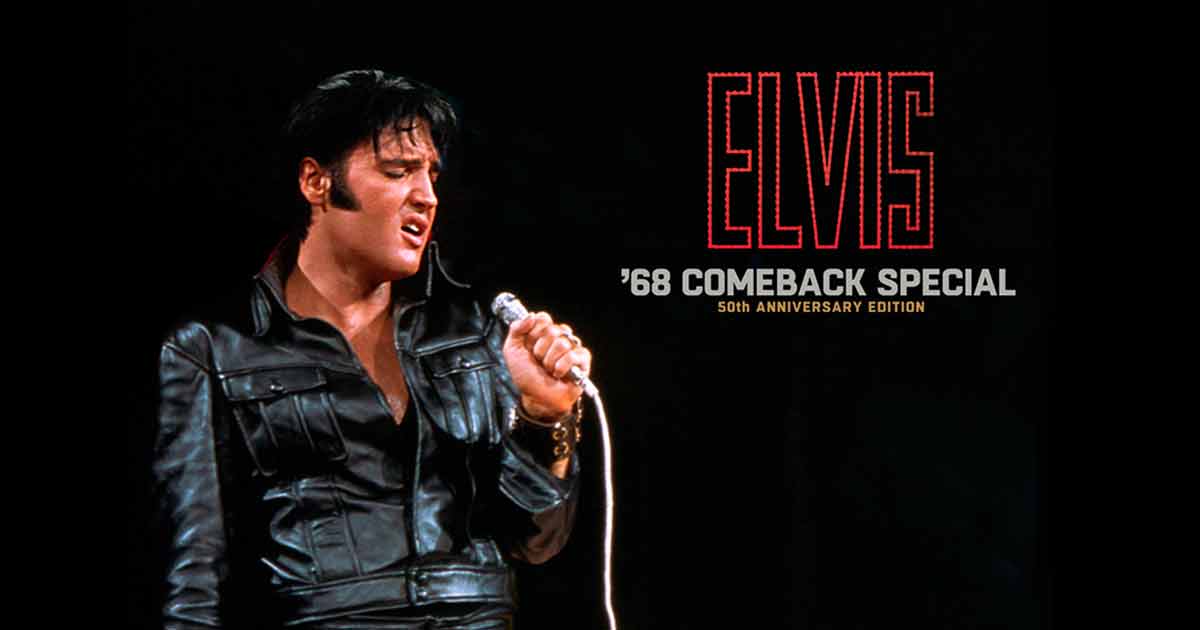 Deluxe 5CD, 2 Blu-ray Disc Set Collects All-Known Audio and Video from The Special in One Package For The First Time

The 50th anniversary of Elvis Presley's groundbreaking 1968 NBC-TV "comeback" special will be commemorated with the release of a deluxe box set by RCA/Legacy Recordings, a division of Sony Music Entertainment, on Friday, November 30. The set arrives just days before the anniversary of the world premiere broadcast of the original special on December 3, 2018.

Elvis Presley – '68 Comeback Special (50th Anniversary Edition) is the definitive chronicle of one of the greatest rock 'n' roll performances ever televised: Elvis Presley at the peak of his powers. For the first time ever, all previously-released audio and newly-restored video from the taping of the special will be available in one package – including unused performances and studio outtakes that spotlight the real Elvis.   The package contains an entire disc showcasing the legendary sessions for the special recorded with Elvis and the Wrecking Crew.

The box set is available for pre-order now: https://Elvis.lnk.to/68ComebackSpecialPR

This 5CD, 2 Blu-ray disc deluxe package also includes an 80-page book featuring rare photographs and ephemera and a new oral history on the special, crafted from interviews conducted for Thom Zimny's 2018 documentary, "Elvis Presley: The Searcher." The newly-restored Blu-ray video was also overseen by Zimny. The content from the box set will be released digitally as separate audio and video products on November 30th.

Also, being released on November 30th is the 2LP vinyl presentation of The King In The Ring. Originally released on vinyl for the first time earlier this year in a limited edition run for Record Store Day, this 2LP set showcases the standout, intimate "sit down" sets from the '68 special. These laid-back live performances were recorded in the round before a small audience and featured a powerful ensemble, including guitarist Scotty Moore and drummer D.J. Fontana, both part of Elvis' original classic backing band.

The anniversary of this electrifying moment in rock n' roll history will continue into 2019 when NBC and Ken Ehrlich Productions team up for a 2-hour primetime television tribute to the original special.

The 50th Anniversary of the Elvis Comeback Special will feature an all-star group of music superstars recreating the spectacle – even the staging – of that legendary night of song. In addition to the musical performances, the production will include rare Elvis footage, outtakes and interviews from those involved in the original '68 Comeback Special.

The '68 Comeback Special (at the time titled "Singer Presents…ELVIS") aired on December 3, 1968 and was a pivotal broadcast event that upped-the-ante on Elvis' career, the evolution of pop culture and the history of television. By 1968, prior to the broadcast, Elvis was no longer seen by the mainstream as the atomic-powered rock and roll pioneer. Since his discharge from the United States Army in 1960, Elvis' career path careened through a string of low-budget (though often successful) formulaic films while the rock music scene was exploding with innovation, experimentation, and an urgency to complement the turbulent era. Elvis hadn't performed in public since 1961 and hadn't appeared on television since 1960.

The special, recorded over several sessions in June 1968, presented Elvis in a variety of settings, from spectacular production numbers ("Nothingville," "Saved," "Guitar Man," "Little Egypt," "Big Boss Man," "Let Yourself Go") to the intimate "sit-down" performances of classic Elvis hits, reuniting the artist with Scotty Moore and DJ Fontana, the guitarist and drummer who'd played alongside Elvis on his earliest records and shows.  The black leather "sit-down" and "stand-up" sequences provided a retrospective of Elvis' career to that point, highlighted with the new song "Memories," written by Mac Davis specifically for the show.  The special's transcendent closing number was Presley's now-classic, emotionally fueled performance of "If I Can Dream," an anthemic new song penned especially for Elvis and the special by W. Earl Brown.

The special was the most-viewed television program in America the week it aired and firmly reestablished Elvis as a major musical and cultural force.  "I think the '68 Special gave him the confidence to get on the road again, knowing that people accepted him," said Priscilla Presley.  "That show was so successful that he just knew this is what he wanted to do, go back and be with an audience."

The success of the '68 Special reignited Presley's career in a major way.  Shortly after the special aired, Elvis entered American Sound Studio in Memphis for the sessions that generated "Suspicious Minds," one of his most enduring #1 hits, and his country-soul masterpiece From Elvis In Memphis (which included the chart-topping "In The Ghetto"). 1969 saw Elvis return to live performance with a record-breaking engagement at The International Hotel in Las Vegas, kickstarting a regular run of live shows that lasted for the rest of his career.

For an in-depth behind the scenes look at the making of the '68 Comeback Special, Director/Producer Steve Binder has written the new book, "Comeback '68 / Elvis: The Story Of The Elvis Special." Now available at ShopElvis.com.  According to Binder, "The only time in network history, I think, that in prime time a variety special for a star like Elvis had no guest stars. He was the star, period."

"I never saw Elvis perform," said Priscilla Presley.  "I only saw him for the first time in the '68 Special. And I could not believe what I saw. It was like, oh my gosh, I get it. I get it. To actually see him on stage, walk out there, and own that stage. I'd never seen anyone control an audience like that in my life, with his magnetism, his energy, his look. It was like he rehearsed that show all his life."

For millions of fans, including a young Bruce Springsteen, the Elvis 68 Comeback Special was a life-changing event.  “I remember I waited for weeks for the ’68 Special," Springsteen recollected recently. "I knew it was coming. I can remember exactly where our TV was set up in the dining room, the exact place I was sitting.  I mean, it’s one of those things that’s imprinted on my memory forever."

Lawdy, Miss Clawdy
Baby, What You Want Me To Do
Dialogue; Medley: Heartbreak Hotel / Hound Dog / All Shook Up
Can't Help Falling In Love
Jailhouse Rock
Dialogue; Love Me Tender

Dialogue; Where Could I Go But To The Lord / Up Above My Head / Saved

ELVIS PRESLEY – THE KING IN THE RING 2LP
Disc 1, Side A