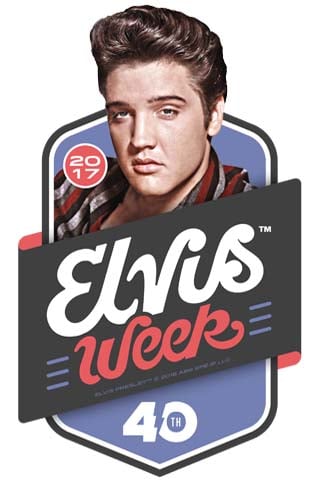 Nine-Day Event to Celebrate the Music, Life and Legacy of Elvis Presley and Commemorate the Milestone 40th Anniversary of Elvis’ Passing

MEMPHIS, Tenn.-- Elvis Week 2017 will mark the 40th anniversary of Elvis’ passing and Graceland is preparing for the largest gathering ever of Elvis fans and friends from around the world for the nine-day celebration of Elvis’ life. Events include appearances by celebrities and musicians, The Auction at Graceland, Ultimate Elvis Tribute Artist Contest Finals, fan club events, charity fundraisers and more. This will be the first Elvis Week since Graceland’s major expansion, which includes the AAA Four-Diamond Guest House at Graceland resort hotel and the new, multi-million dollar entertainment and exhibit complex, Elvis Presley’s Memphis.

Tickets for all Elvis Week events go on-sale beginning Thursday, May 25 (Presale for Graceland Insiders at 8:30 am Central time. General On Sale at 11:00 am Central time). For additional ticket information, including exclusive Elvis Week packages, visit the Elvis Week ticket page. Most events will take place at the new Graceland Soundstage, a state-of-the-art production and performance space in the heart of Graceland’s new entertainment and exhibit complex, Elvis Presley’s Memphis, directly across the street from Graceland Mansion.

A special highlight of Elvis Week will be the 40th Anniversary Celebration Concert Event at the FedExForum in downtown Memphis on August 16, 2017, Elvis: The Wonder of You. In this new, live concert experience, a symphony orchestra performs live on stage with Elvis on the big screen. The concert will feature a special personal appearance by Priscilla Presley and other surprise guests. The critically-acclaimed production, which has sold out arenas across the world since last November, is inspired by the award-winning, chart-topping album releases "If I Can Dream" and "The Wonder of You,” which features remastered vocals of the king’s voice and new orchestral arrangements of some of his biggest hits.

The cornerstone event, the Candlelight Vigil, will begin on Tuesday, August 15, at 8:30 p.m. CDT at Graceland’s front gate. Elvis music sets the tone of the evening as fans walk up the driveway to the Meditation Garden. This event lasts throughout the night as thousands of participants gather on Elvis Presley Boulevard listening to music, remembering Elvis and enjoying the memorials that are created by fans along the street.

There is very limited availability at The Guest House at Graceland resort hotel on select nights during Elvis Week. Visit GuestHouseGraceland.com for availability and room reservations.

Celebrities, performers and other information will be updated regularly with new announcements at ElvisWeek.com. An overview of the events follow (all times shown are Central Time. Artists and schedule subject to change).

8:00 AM. Run starts and finishes at gates of Graceland.

Livitup Inc. is hosting their annual benefit 5K run which also includes a post-race and a party featuring food and music.

This event will feature special programming that celebrates both Elvis and his dedicated fan clubs. Special guest speaker for the event will be Elvis’ friend and hair stylist Larry Geller.

The Auction at Graceland

This event celebrates the gospel music of Elvis that not only influenced him, but that also earned him his only three Grammy Awards. Special guest performers for the evening include some who shared the stage with Elvis, plus those who have been inspired by his music: Bill Baize, Donnie Sumner, Larry Strickland and Ed Hill, former members of JD Sumner and the Stamps Quartet; Terry Blackwood, Darrell Toney and Lynn Royce Taylor of Terry Blackwood and The Imperials; plus musician Terry Mike Jeffrey. The show will feature Elvis imagery and videos on the big screen throughout the performance.

Elvis' influence on music, pop culture and society has been studied, analyzed and debated since his music first hit the airwaves in 1954. Elvis 101 features scholars, authors and those who have spent hundreds of hours studying Elvis Presley talking in-depth about different aspects of The King of Rock 'n' Roll's life and career. Special guests will include: author Peter Guralnick, sharing stories about what it was like to research for his two Elvis biographies “Last Train to Memphis” and “Careless Love”; John Beifuss, film critic and reporter for the Memphis Commercial Appeal, talking about Elvis’ films; Sony Music's Ernst Jorgensen; and Tupelo historian Roy Turner.

A Salute to Sun Records Hosted by John Paul Keith

Hosted by renowned singer-songwriter John Paul Keith with Will Tucker and Brad Birkedahl, featuring special guests Jerry Phillips and Sun studio drummer J.M. Van Eaton. Keith, along with some of Memphis' top musicians will pay tribute to the early music of Elvis and all the legendary Sun artists, and will feature appearances with Tucker, Shawn Zorn, and Griffin Rone.

The Graceland Insiders Conference will feature special segments that highlight various parts of Elvis' life and career with sneak peeks, behind-the-scenes looks, rarely-seen videos, feature segments filmed just for the event and much more. Special guests include: Bill Wallace, Elvis' friend and karate champion; Sam Thompson, Elvis’ bodyguard and the brother of Elvis’ girlfriend Linda Thompson; Charles Stone, who worked closely with the Colonel on Elvis' tours and career; Dick Grob, who served as chief of security for Elvis; Lisa Marie co-pilot Ron Strauss; and more to be announced.

A Band of Legends Remembers Elvis

A night of storytelling and amazing music from the legendary musicians who shared both the stage and the studio with Elvis. Special guests include Norbert Putnam (bass), David Briggs (piano), Memphis Boys’ Bobby Wood (piano) and Gene Chrisman (drummer); plus guitarist Kerry Marx.

Elvis enjoyed surrounding himself with friends and family whether he was home at Graceland, traveling on tour, or vacationing. Some of Elvis’ closet friends and family will share their memories and stories of time spent with Elvis. Special guests include Priscilla Presley, plus Elvis’ close personal friends Jerry Schilling, Bill Medley, Bill Morris and childhood friend Guy Harris.

The Songwriters Showcase will feature music, stories and special guests talking about the music they wrote for Elvis. Confirmed guests include Mac Davis, who wrote many of Elvis' hits and Mike Stoller, who with his partner Jerry Leiber, wrote more than twenty songs recorded by Elvis and Mark James among others.

After an opening ceremony at the Gates of Graceland, fans are invited to walk up the driveway to Elvis' gravesite and back down carrying a candle in quiet remembrance. Gates remain open until all who wish to participate in the procession have done so, which typically takes until the early morning hours of August 16, the anniversary of Elvis' passing.

Conversations on Elvis: In the Studio

Remembrances of what it was like to record in the studio with Elvis from those who were there to experience it. Special guests include: DJ Fontana, who recorded with Elvis in the 1950s and 1960s; back-up singers Mary Holladay Pederson and Ginger Holladay, who sang with Elvis on some of his biggest hits; and Sony Music's Ernst Jorgensen, author of "A Life in Music," a definitive study of Elvis' recording sessions. Additional guests to be announced.

ELVIS: The Wonder of You

Conversations on Elvis: Elvis in the Movies

Many who were on the big screen with Elvis in one of his 31 feature films will share their stories. Confirmed guests include Marlyn Mason, Elvis’ co-star in “The Trouble with Girls" and Pat Priest, Elvis' co-star in "Easy Come, Easy Go." Additional guests to be announced soon.

More than 20 of the best Elvis tribute artists in the world perform on stage in the Semifinal Round of the 2017 Ultimate Elvis Tribute Artist Contest as they compete for their chance to advance to the final round of the contest.

Conversations on Elvis: The Elvis Connection

This special event will feature musicians, actors and entertainers sharing their stories on how they have been influenced by Elvis and what the King of Rock ‘n’ Roll means to them. Special guests to be announced.

VIP ticket holders are invited to join a private autograph session with past winners of the Ultimate Elvis Tribute Artist Contest plus 2017 finalists.

Graceland archivists will offer a look inside the Graceland Archives to discuss about what is done to help protect the artifacts and show some of the most unique and prized items that in the Archives.

For one night, all on one stage, past Ultimate Elvis Tribute Artist winners return for an unforgettable concert event at the Graceland Soundstage, performing music from all stages of Elvis’ career.

The top 10 Elvis tribute artists from the Semifinal Round compete for the 2017 Ultimate Elvis Tribute Artist Contest title.

Elvis Presley’s Graceland, in Memphis, is music’s most important and beloved landmark, with hundreds of thousands of fans from around the world visiting the historic home each year. Elvis Presley Enterprises, Inc. (EPE) manages the operations of Graceland and its related properties, including Elvis Presley's Memphis, Graceland's new entertainment and exhibition complex over 200,000 square feet in size; the AAA Four-Diamond Guest House at Graceland 450-room hotel; and the Graceland Archives, featuring thousands of artifacts from Elvis’ home and career. EPE also produces and licenses Elvis-themed live events, tours and attractions worldwide. Graceland Holdings LLC, led by managing partner Joel Weinshanker, is the majority owner of EPE. In 2015, Graceland was named the world’s “Best Musical Attraction” and “Best Historic Southern Attraction” in the USA Today 10 Best Reader's Choice Awards and in 2013, voted the #1 “Iconic American Attraction” in the same poll. For more information on EPE and Graceland, visit www.graceland.com.