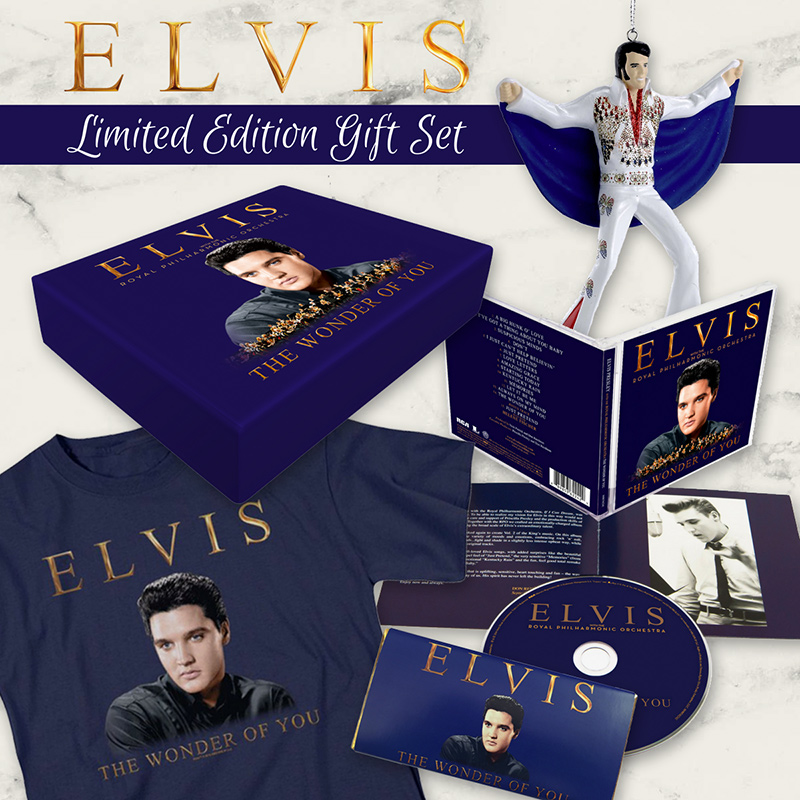 NOVEMBER 28, 2016 – Elvis fans worldwide are once again proving why the King still reigns, with the remarkable success of the new Elvis Presley album The Wonder Of You: Elvis Presley With The Royal Philharmonic Orchestra, out now on Sony Legacy Recordings. The stellar album has earned media acclaim worldwide and broke UK charts records by debuting at #1, giving Elvis Presley a 13th UK No.1 album and officially making him the single most successful solo artist in UK chart history. The latest chart-topper for Presley positioned him ahead of fellow music stars Madonna (12 No. 1s), David Bowie (11), Robbie Williams (11) and Michael Jackson (10), and the album continues to hold strong in the Top 5 on the UK charts.

The Wonder Of You executive producer Priscilla Presley said, “This achievement is something I know Elvis would have been so thankful for. I am incredibly proud of all he has accomplished and so grateful to the UK fans who have kept his legacy alive with all of their support. I hope they continue to listen and love his music as much as I do.” The Wonder of You is the follow up to last year’s huge global phenomenon If I Can Dream: Elvis Presley With The Royal Philharmonic Orchestra, which topped charts worldwide and sold over 1.5 million copies.

The Wonder of You focuses on the iconic artist’s unmistakable voice with lush new orchestral accompaniment, recorded at Abbey Road Studios in London with acclaimed producers Don Reedman and Nick Patrick. Media worldwide are also praising the album and its variety of musical styles: ENTERTAINMENT WEEKLY called the album’s title track “powerful” (10/14/16), FORBES.COM stated, “these new compilations are putting a fresh spin on old material, and giving fans a new perspective” (11/10/16) and ASSOCIATED PRESS said the new album “offers one more chance to enjoy Presley's voice in a different context, deliciously backed by a world-class orchestra geared toward the nuances of his delivery. It's a new twist on a very familiar, and treasured, body of work. The opening rocker, "A Big Hunk O' Love," sounds totally fresh in an orchestral mode. Fans of Elvis's gospel approach will thrill to his masterful "Amazing Grace.”” (10/20/16)

Fans in the UK also had the chance to experience the new album with a live concert experience featuring the most recognizable voice of all time, Elvis Presley, backed by the legendary Royal Philharmonic Concert Orchestra. Performances included songs from both The Wonder of You and If I Can Dream. The sold-out six date UK arena run began on November 17th and ran through November 24th.

Vinyl LP and deluxe version of the album will be released on December 2nd. The latter will include a CD with two additional tracks, two 150 gram LPs in a gatefold package, a poster suitable for framing and a 12 page booklet, all housed in a beautiful 12”x12” lift off box. It is available to pre-order now.