Skip to content
Back To News Index
1956: The Year Elvis Presley Skyrocketed To Global Fame! 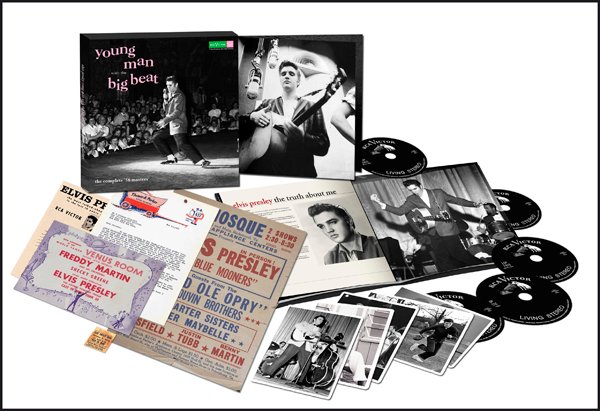 The explosion of Elvis Presley’s career on RCA Records during the 12 months of 1956 was a wondrous evolution. By the end of that fateful year, the rockabilly singer from Memphis whose audience was rooted in the deep Southern states, would be the most famous person in the world. How did it happen? In one word: music. “…My pelvis had nothin’ to do with what I do,” Elvis said in 1956. “I just get kinda in rhythm with the music, I jump around to it because I enjoy what I’m doin’, I’m not tryin’ to be vulgar, I’m not tryin’ to sell any sex, I’m not tryin’ to look vulgar and nasty. I just enjoy what I’m doin’ and tryin’ to make the best of it ...” The rest, of course, is history. Ten million singles sold, three million EPs, and 800,000 LPs’ worth, in just that first year. 1956.

YOUNG MAN WITH THE BIG BEAT puts the focus on Elvis in 1956. The package includes his RCA studio master recordings and outtakes in New York, Nashville and Memphis; live perform¬ances; interviews; and much more. Taking its name from an RCA poster campaign for his debut album, the super deluxe 5-CD, 12-inch square box set (with an amazing 80-page book with timeline) is available now for pre-order at www.elvis1956.com. Pre-order customers will also receive an exclusive replica vinyl 7” of Elvis’ first 45rpm EP for RCA Records. Sharing the same striking cover art as Elvis’ debut album, the EP (“extended play”) features “Blue Suede Shoes,” “Tutti Frutti,” “I Got A Woman” and “Just Because.” This vinyl single is only available through this special website offer, and it will ship upon payment for the box set.

The actual box set will be available everywhere September 27, 2011, on RCA/Legacy, a division of SONY MUSIC ENTERTAINMENT.

The five CDs comprise the following, all material originating in 1956:

Over the course of CD One and Two, YOUNG MAN WITH THE BIG BEAT compiles Elvis Presley’s complete 1956 masters. The year was fueled by a run of hits that kept radio well-stocked: “Heartbreak Hotel,” “I Was The One,” “Blue Suede Shoes,” “Money Honey,” “I Want You, I Need You, I Love You,” “My Baby Left Me,” “Don't Be Cruel,” “Hound Dog,” and “Love Me Tender” topping the list.

In addition to the master takes, outtakes, and live performances heard on CDs One through Four of YOUNG MAN WITH THE BIG BEAT, there is also the most extensive collection of audio spoken word material ever included on an RCA release. These extended and rare interviews are previously unreleased by RCA Records. The first of these segments, at the end of CD Four, is the complete Elvis interview by Robert Brown that took place at the Warwick Hotel in New York City on March 24th. CD Five then presents:

In tandem with the release of YOUNG MAN WITH THE BIG BEAT, RCA/ Legacy will also release (on the same date) ELVIS PRESLEY: LEGACY EDITION. This special double-CD package will couple, for the first time, the Elvis Presley and Elvis albums of 1956. They will be heard as they are on CD One and CD Two of the YOUNG MAN box set (with the same bonus tracks).

ELVIS PRESLEY: LEGACY EDITION (RCA/Legacy 88697 90795 2) has as its cover image the classic Elvis Presley debut LP design that has been paid homage by the Clash (London Calling), Big Audio Dynamite (F-Punk), k.d. lang (Reintarnation), and many others. The Legacy Edition booklet will contain new liner notes and rare archival photography.

YOUNG MAN WITH THE BIG BEAT will feature one of the most extra¬ord¬inary books every created at Legacy. The focal point of the book, spread across its 80 pages, will be a unique, meticulously-researched, day-by-day chronology of Elvis’ iconic year, including every concert, every recording date, every television appearance, personal events in Elvis’ life, and much more. A dazzling photo array of memorabilia will illustrate each day and entry. Concert ticket stubs, RCA memoranda, letters from fans, postcards from Elvis to his family, tour itineraries, magazine covers and articles, trade charts, fan club relics, RCA publicity photos, concert photos, candid photos, and more will be a feast for the eyes and the imagination as 1956 unfolds. The book was assembled by Elvis expert Roger Semon.

YOUNG MAN WITH THE BIG BEAT was produced for reissue by Ernst Mikael Jørgensen, the respected director of RCA’s Elvis catalog for over two decades. Jørgensen is also the author of the essential research guide, Elvis Presley: A Life In Music (St. Martin’s Press, 1998). He recently completed The Complete Elvis Presley Masters, the 27-CD crown jewel in RCA/Legacy’s Elvis 75 campaign of 2010-2011. That set contains all 711 master recordings released during Elvis’ lifetime, housed in a 12-inch square presentation case which includes a coffee table-style book.

After nearly a year and a half of studio recording and singles releases on Sun Records of Memphis, Elvis Presley’s recording contract was sold to RCA Records on November 21, 1955. Elvis arrived at RCA Studios in Nashville on January 10, 1956, with his band, guitarist Scotty Moore, bassist Bill Black, and D.J. Fontana on drums. It was the beginning of an odyssey that would not only transform the lives of Elvis and his buddies, but would also reshape the face of popular music, entertainment television, radio, concert promotion, movie production and more in America and around the world.

Buddy Holly: “Without Elvis none of us could have made it.”
Scotty Moore: “He had so much energy we had to sit up nights to wear him out so that we could go to sleep.”
John Lennon: “My crushing ambition in life was to be like Elvis Presley.”
Bruce Springsteen: “My mother was watching the Ed Sullivan Show and Elvis came on. I went out and bought a guitar straight away...”
James Brown: “Elvis taught white America to get down.”

From the master takes recorded at those January 10th sessions, “Heartbreak Hotel” (inducted into the Grammy® Hall Of Fame) and “I Was the One,” to the Million Dollar Quartet jam session back home in Memphis on December 4th, it was a year in music that will never be equaled.

Both the box set and the Legacy Edition are currently available for pre-order at Amazon.com. Order YOUNG MAN WITH A BIG BEAT at http://amzn.to/jYSrkn; order ELVIS PRESLEY: LEGACY EDITION at http://amzn.to/izCRci.